**update and addenda at end

Once there were four friends from the suburbs of Chicago who were fans of Lou Malnati’s pizza. For obvious reasons. Reasons like, oh, I don’t know, World’s Greatest Pizza of All Time. (They ship nationwide. Game changer.) On Friday nights, instead of going to the lights, they went to get Lou’s pizza. For obvious reasons. See above. They ate pizza for dinner. If their guts and souls weren’t full, they ate pizza for dessert. Chocolate Chip Pizza, that is, “a freshly baked chocolate chip cookie prepared in a deep dish pizza pan, topped with vanilla bean ice cream and whipped cream. Serves 2-3.” 1610 calories per serving. In case you’re wondering.

Some years later, one of those four friends from the suburbs of Chicago – let’s call him Russell – found himself working in the kitchen at a lovely little place in northern Minnesota called Castaway Club (a Young Life camp) alongside the main chef – let’s call him Dave. During the summer months, Castaway Club serves 3 meals a day to 400 people, give or take.

One day Russell and some co-workers drove to The Medium-Sized City just down the road a ways to eat at a new “chicago” pizzeria – which every Chicagoan knows is a slippery claim to make and a nearly impossible standard to uphold unless the pizzeria is, you know, actually in Chicago. They went hoping for the best, but prepared for much less.

That “chicago” pizzeria in A Medium-Sized City on the outskirts of northern Minnesota had a chocolate-chip-cookie-ice-cream-ish dessert on the menu. Like Lou’s. Sort of. The friends ordered it. The friends ate it. The friends thought about it. Then Russell – the only Chicagoan in the bunch – said to his friends, “Hmmm. Well. Er. We could do better than this. Way better. We could make The Real Thing.”

Thus began a long process of experimenting with ingredients, temperatures, timing, pans, ice-cream, serving, and all sorts of baking-in-a-big-kitchen-for-several-hundred-people issues. With summer fast approaching, there wasn’t much time to crack the code of The Perfect Dessert.

After several months of trying all manner of bakeware, schedules, recipes, and systems, Russell, Dave, and some others – let’s call them Kristina, Mandi, Lindsay, and Brad – finally perfected what has come to be lovingly known as The Big Cookie.

The secret to its success is simple:
1. keep it simple (just cookie and ice-cream)
2. keep it hot (on the bottom)
3. keep it cold (on the top)

Keeping it simple, though, isn’t easy. It rarely is.

After serving dinner to 400 folks, the Big Cookies – pressed perfectly into their deep-dish pizza pans – go into the oven. Not a moment sooner. While they bake, thick round slabs of ice cream – cut and kept frozen until just the right moment – are rolled out of the freezer. Just as 400 folks finish eating their dinner, the Big Cookies come out of the oven, cooked so that the outside is perfectly browned and the inside is perfectly gooey. Each one is quickly topped with its own wheel of ice cream that cools the cookie innards just enough to maintain the just-on-the-edge-of-gooey stage while the hot cookie warms the ice cream just enough to make it just-on-the-edge-of-melting creamy. And then they’re served. Immediately. Without a moment to lose. While still hot/frozen. While still perfect. While still sublime.

There is no eating etiquette. Fact. Anything goes. Some people like to savor the wonder. Others like to inhale it. The only rule about eating The Big Cookie – and it’s more of a law, really, like gravity, because it’s not legislated on the front end but it proves to be true on the back-end 100% of the time – is that it must be fully consumed. Every last chip. Every last crumb. Every last drip.

Over the years, The Big Cookie has made its way to almost all of the other Young Life camps (a textbook example of market demand precipitated by word-of-mouth chatter), and each one has its own distinct personality. But the first Big Cookie – The Original, if you will – was first served in a lovely little place in northern Minnesota in the summer of 2002 to 400 people, give or take.

That was 13 years ago. The Big Cookie is officially a teenager now, but just as wondrous and delicious as ever.

On June 14, 2015, the first Big Cookie of the summer season will be served at Castaway Club, now made by a new generation of kitchen folk – let’s call them Deb and Brandon and company. It’s going to be a stupendous event. Only a very few people will know the story of how it came to be. Most will have no idea how much thinking and hoping and strategizing and trial-and-error went into making it just the perfect combination of hot and cold, cooked and gooey, sweet and sweeter. They for sure won’t realize how much work and planning is required to make such a simple looking dessert so perfectly perfect, week after week after week. 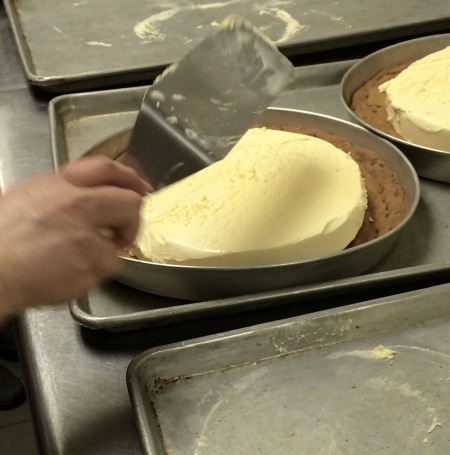 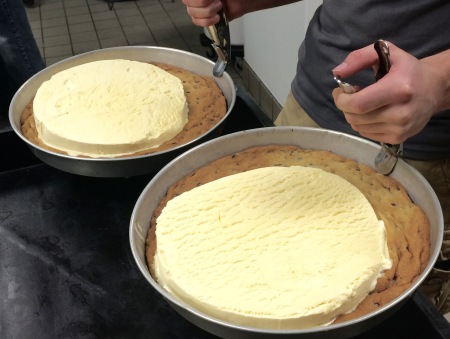 **Wowsa. The Big Cookie is near and dear to many people. No surprise there. A few people have asked about the veracity of this story, so I thought I’d give a short background – for those who are interested. From 1992-2004, we lived in Detroit Lakes, MN – just a hop, skip and a jump down the road from Castaway Club. For much of that time, my husband Mark was on property staff while also serving as the Area Director in Detroit Lakes. We hosted many weekend camps, did many summer assignments, and knew the kitchen staff (and others) like family. Russell (his real name) just happened to grow up down the street from me. When he moved to MN, he lived with us for a while, and is as close to being family as non-family can be – which is to say he’s family. This past March I was at Castaway Club for a LYO (Lutheran Youth Organization) retreat. They served the Big Cookie. That’s when all of these pictures were taken. All those Big Cookies I’d eaten over the years, and I didn’t have a single photo memory. Weird. Anyway, Dave (his real name) and his daughter Kristina (yep – also real name) were there: she was the camp director and he was serving on kitchen work crew back in his old stomping grounds. One of them mentioned that the very first Big Cookie “experiment” had been at an LYO event a number of years ago. I was curious about just how long ago, so called Russell and had a long talk with him. All of that to say, the veracity of this story is, well, let’s call it veracious.

Of course, many more people have been part of The Big Cookie story than those mentioned above. For example, there was a summer kitchen intern that year – let’s call him Jon – who probably constructed more Big Cookies than he can count. And probably every other property staff person has at one time or another been part of the extravaganza known as Big Cookie Night (which is, er, well, the night they serve The Big Cookie). Add in countless kitchen Summer Staff, hundreds of dining hall Work Crew … and everyone who’s ever partaken of The Big Cookie (because let’s be honest, after you’ve eaten it the first time, you are part of The Big Cookie Family forever). I knew Big Cookie Loyalty and Love ran deep – but even I’ve been surprised by exactly how deep it runs. Really, it’s just one dessert of one night of camp that many people experience only once in their lifetime…but often it’s the small things that become The Big Things, isn’t it?