[Note: When a writer steps away from writing, for whatever reason (and there are usually several, and at least some of the several are usually very real and true), it is hard to step back into it for the simple reason that writing is work. Hard work. Fly-in-the-ointment work. Day-in-day-out-nose-to-the-grindstone work. No matter how much it is embedded in one’s blood, bones, heart and breath. But: it is good work. Glorious work. Real work. Meaningful work. True work. And so writers – if they step away, when they step back – must always step back into the work again. Because they can’t not. Because they must. It’s just a matter of when. Today, for example…]

It’s a big year for Lewisians across the world.

Today a new-found old letter hits the auction block. I read about it here first, on a delightful blog I discovered during my stepped-away-from-writing season.

The letter is delightful for several reasons.

You can imagine how satisfying this is to people who’ve known it all along – known it not just in their own bones, but known it based on all the internal evidence of the books themselves (a critical literary practice that Lewis himself holds in high esteem).

But this new-found old letter is not the only Big Lewis News of the year. There are also two new-found old articles that have heretofore never been collected or anthologized. I don’t remember where I first got wind of these, but there were hints in the Lewis-sphere that The Strand Magazine might contain articles by Lewis that were not yet indexed in Lewis collections.

Happily, my research institution maintains copies of Strand Magazine in its expansively mysterious repository. And after much dusty digging, sorting, and page-flipping, I found these: 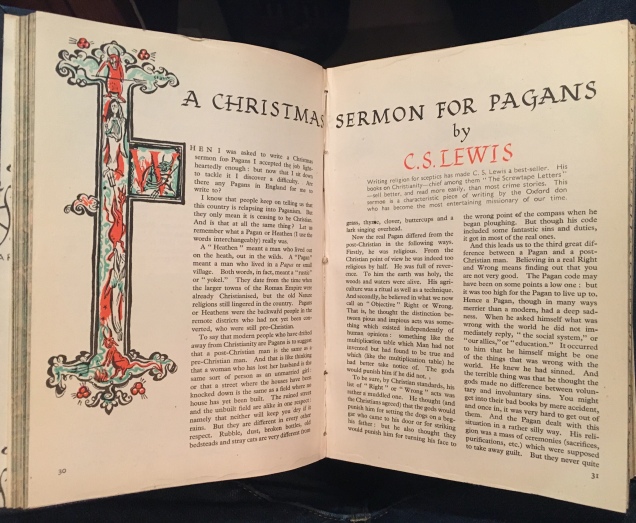 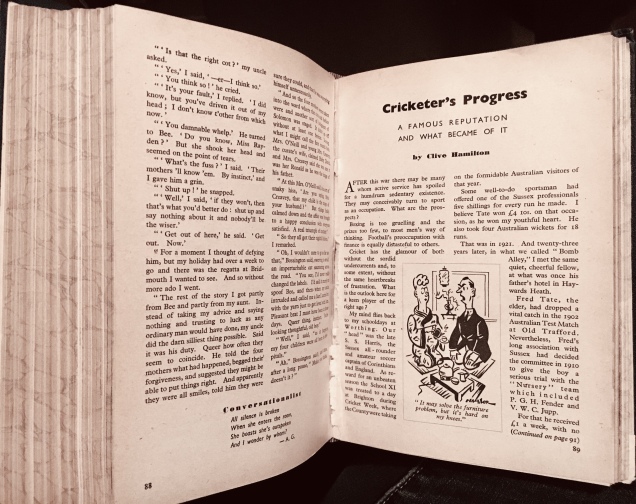 “A Christmas Sermon for Pagans” will sound familiar to anyone who has read Mere Christianity and De Descriptione Temporum. The language, phrases, and ideas are recognizably Lewis. “Cricket’s Progress” is another thing altogether. Did Lewis – who wrote other things under the pseudonym Clive Hamilton – care about cricket? Did he hanker to be a sports writer? I haven’t pored over this article enough to make any sense of what’s going on, but I do find vague hints of Puddleglum in this narrated Cricketer’s quote:

“It’s a great game, but fast bowling takes too much out of a fellow,” he told me. “You want to be a nice, steady all-rounder, good for thirty years’ service…Keep one eye on the ball and the other on the future, and you’ll be all right. And above all, never let them get you down.”

It does rather sound like our favorite wiggle, doesn’t it?

“I’m not going to lose an opportunity like this. It will do me good. They all say – I mean, the other wiggles all say – that I’m too flighty; don’t take life seriously enough. If they’ve said it once, they’ve said it a thousand times. ‘Puddleglum,’ they’ve said, ‘you’re altogether too full of bobance and bounce and high spirits. You’ve got to learn that life isn’t all fricasseed frogs and eel pie. You want something to sober you down a bit. We’re only saying it for your own good, Puddleglum.’ That’s what they say. Now a job like this – a journey up north just as winter’s beginning, looking for a Prince that probably isn’t there, by way of a ruined city that no one has even seen – will be just the thing. If that doesn’t steady a chap, I don’t know what will.”

In a fascinating twist of literary nuance, the final page of “Cricket” features a footer quote by G. K. Chesterton. Curious indeed.

All of that to say – a new-found old letter and two new-found old articles are no small thing in the world of Lewis. And though there have been many, many reasons and moments and means to step back into the world of writing, these have proven to be the golden ticket.

In Lewis’s own words to the Dear Grittletonians:

“Do you write stories yourselves? I did at your age. It is the greatest fun.”

Or, modified for this specific juncture of life:

“Do you write? I do. It is the hardest work. And the greatest fun.”